Autobahn Adventures’ itineraries are designed with flexibility in mind. From auto and historical museums, castles, cathedrals, medieval cities and breathtaking countryside - your tour has been planned to allow you to visit the attractions of your choice. 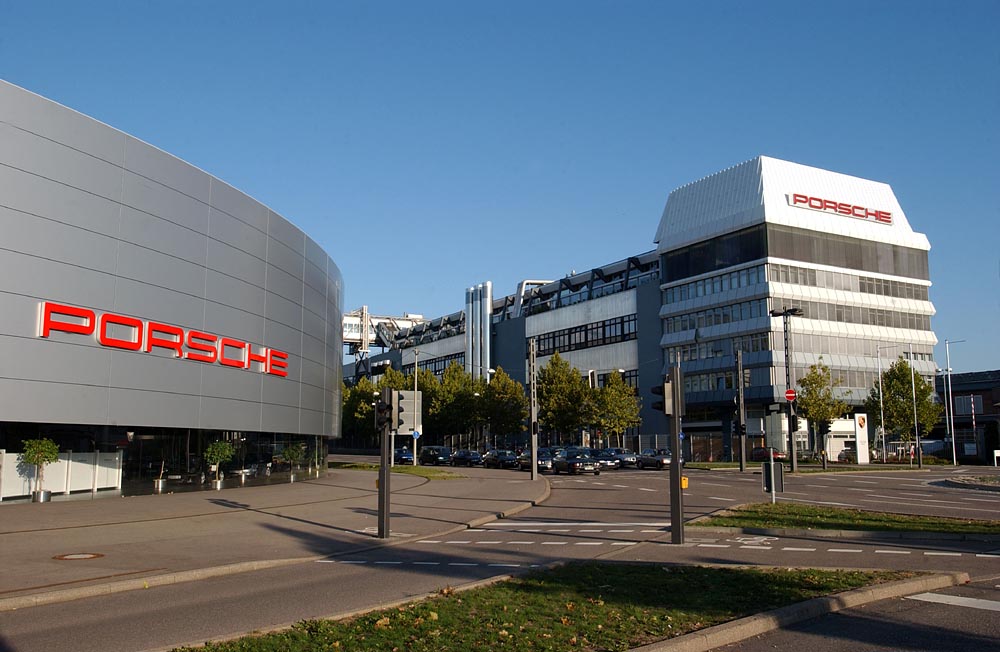 The Porsche Factory tour allows you to experience the Porsche production process up close – from the engine shop through the upholstery shops, to final assembly. The partially automated body shop operates on the basis of a model mix system, which means all variants of the 911 can be produced in any required sequence on only one production line. The multi-storey production set-up in the area of body and vehicle assembly is a further special feature underlining the unique character of the Porsche factory in Zuffenhausen. The engines for all of Porsche's standard production vehicles are produced in Zuffenhausen, including the flat 6 boxer engine for the 911 as well as the V6 and V8 engines for the Cayenne, Macan and Panamera. 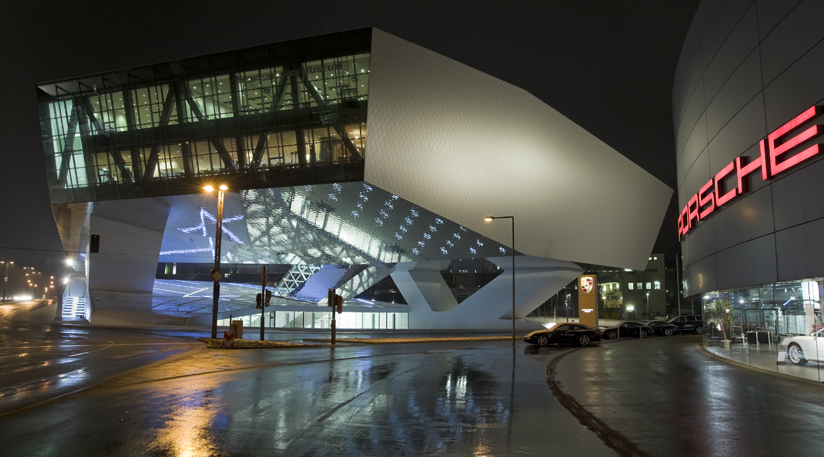 The new Porsche Museum stands on a conspicuous junction just outside Porsche Headquarters in Zuffenhausen. The display area covers 5600 square meters and features around 80 exhibits, many are rare and historical models. The original Porsche museum opened in 1976 in a side-road near the Porsche factory. It was a relatively small works museum with little parking space and it was only big enough to hold around 20 exhibits (in rotation). Porsche built the new museum as a kind of "rolling museum" with rotating exhibits from a stock of 500 restored cars, many in pristine condition and still in full driving order. 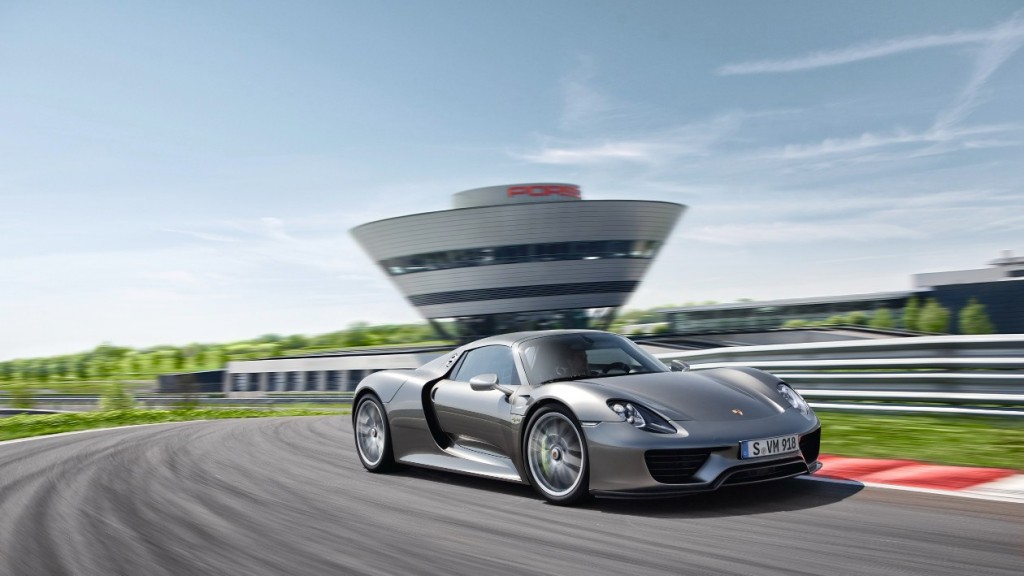 On tarmac or cross-country, Porsche Factory Leipzig is a unique location that is well worth a visit. Guided tours of the Cayenne, Panamera and now Macan production facilities are offered as well as exciting driving events. A visit to Porsche Leipzig is the ideal way to combine business with pleasure. The opportunity to drive a Porsche on the test track, as a 'co-pilot' next to a professional Porsche instructor or directly behind the wheel is a unique experience. The track has also been awarded a "Grade F1T" certificate, which means that Formula 1 cars can do test laps here. Many parts of the track are based on some of the world's most legendary race track corners. 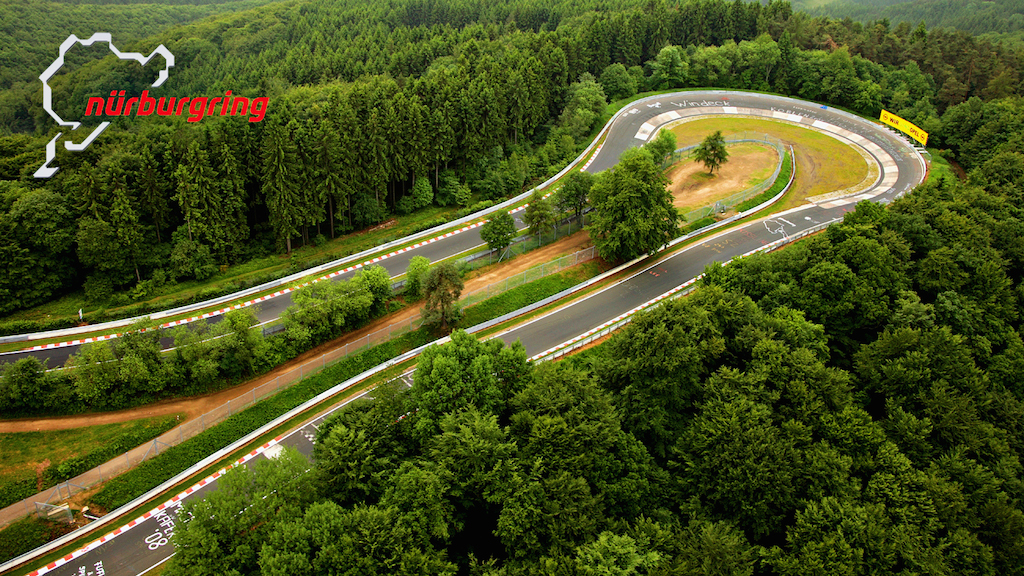 The Nürburgring is a motorsport complex surrounding the small village of Nürburg, Germany. It features a modern Grand Prix race track built in 1984, and a much longer old North loop ( Nordschleife ) track which was built in 1927 around the village and medieval castle of Nürburg in the Eifel mountains. It is located about 70 km south of Cologne, and 120 km northwest of Frankfurt. The north loop is 20.8 km long and has more than 300 metres of elevation change from its lowest to highest points. The old track was nicknamed The Green Hell by Jackie Stewart and is widely considered the toughest, most dangerous, and most demanding purpose-built racing circuit in the world. Autobahn Adventures offers packages to drive this spectacular circuit. Please contact us for more information. 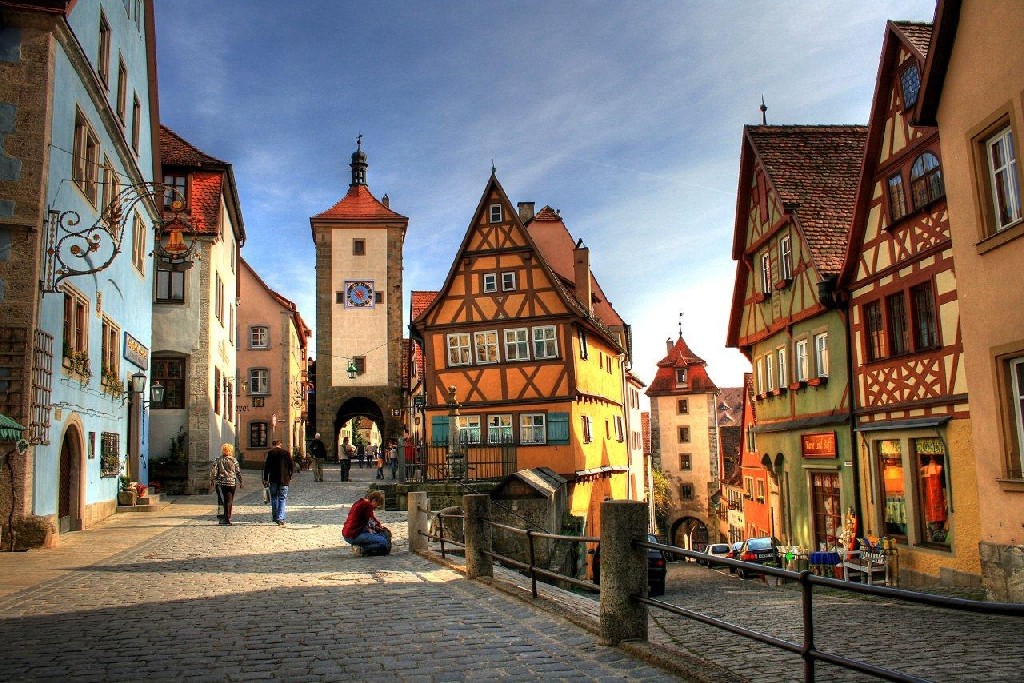 Rothenburg ob der Tauber in Germany - that beautiful little town on the Romantic Road is for tourists the epitome of German cities. The Altstadt (old town) of Rothenburg Germany is a patchwork of winding cobbled lanes lined with picturesque half timbered houses. Massive towers like Röderturm and the intact city walls form a ring around Rothenburg and you can walk on top of it to get great views over the city and the Tauber valley. No other town in Germany brings you closer to the spirit of the Middle Ages. What makes Rothenburg ob der Tauber Germany even more exciting is its reputation as town of eternal Christmas. All year round shops offer handcrafted Christmas gifts. 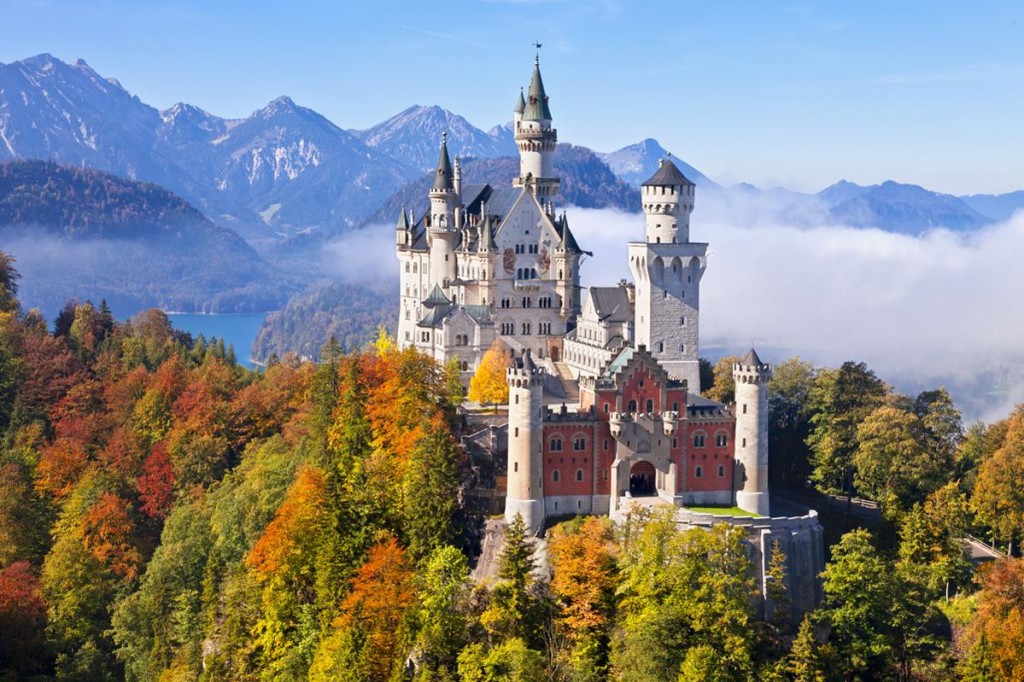 Neuschwanstein Castle is a 19th-century Gothic palace on a rugged hill above the village of Hohenschwangau near Füssen in southwest Bavaria, Germany. The palace was commissioned by Ludwig II of Bavaria as a retreat and as an homage to Richard Wagner. The palace was intended as a personal refuge for the reclusive king, but it was opened to the paying public immediately after his death in 1886. Since then over 60 million people have visited Neuschwanstein Castle. More than 1.3 million people visit annually, with up to 6,000 per day in the summer. The palace has appeared prominently in several movies and was the inspiration for Disneyland's Sleeping Beauty Castle. 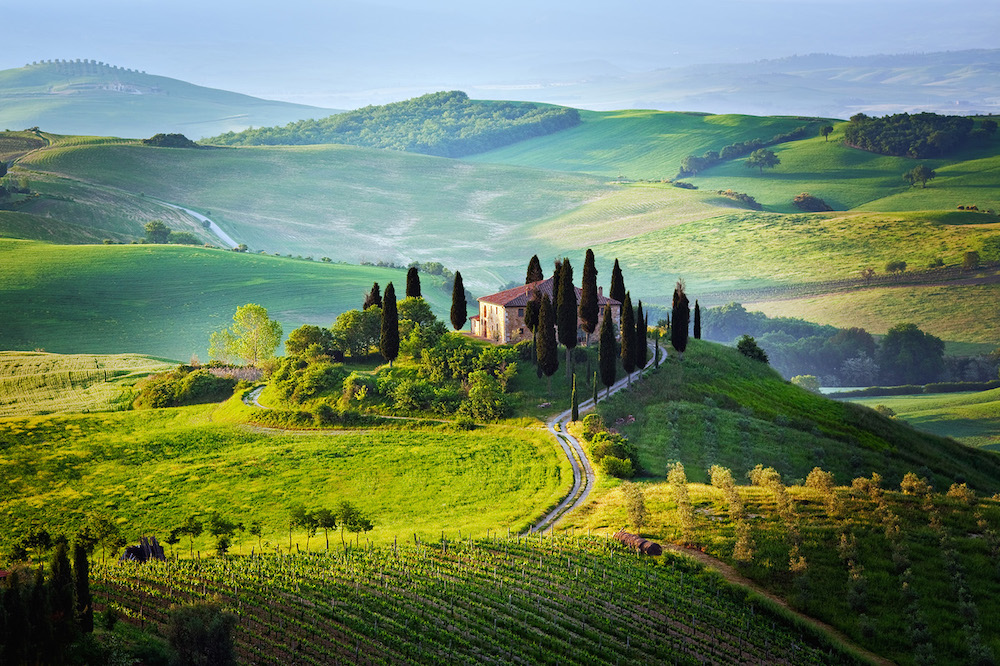 Tuscany is one of the most picturesque regions of Italy. It impresses with its unique and diverse landscape. Vineyards mingle with olive trees and alternate with the original bareness of the countryside. This sparseness is broken up by lanes of towering cypress trees. Little-used roads wind their way up hills and run through small sleepy villages. With Autobahn Adventures you drive on selected routes in Tuscany. Many of them were also sections of the legendary Mille Miglia race. But Tuscany does not only make the hearts of car enthusiasts beat faster. It also offers lovers of culture cities such as Florence, Siena and San Gimignano. Close your eyes and imagine gliding along the dream roads of Tuscany in an Audi R8 Spyder. You will enjoy the wind in your hair, the driving experience, the scenery, incredible food and the unique wines of Chianti. 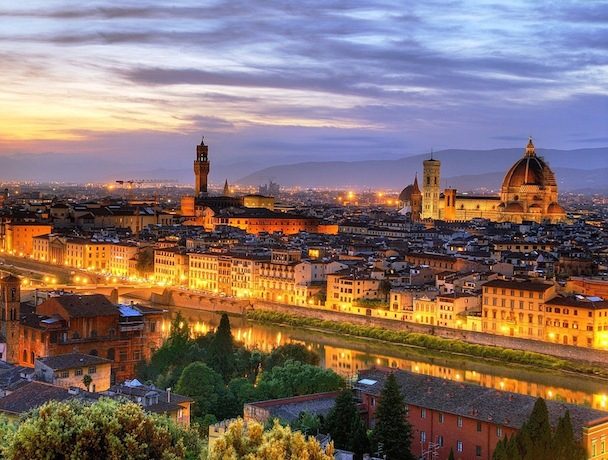 Florence is the capital city of the Italian region of Tuscany and of the province of Florence. It is the most populous city in Tuscany, with approximately 370,000 inhabitants, expanding to over 1.5 million in the metropolitan area. Florence is famous for its history: a centre of medieval European trade and finance and one of the wealthiest cities of the time, it is considered the birthplace of the Renaissance, and has been called "the Athens of the Middle Ages". The Historic Centre of Florence attracts millions of tourists each year, and Euromonitor International ranked the city as the world's 89th most visited in 2012, with 1.8 million visitors. It was declared a World Heritage Site by UNESCO in 1982. The city is noted for its culture, Renaissance art and architecture and monuments. The city also contains numerous museums and art galleries. 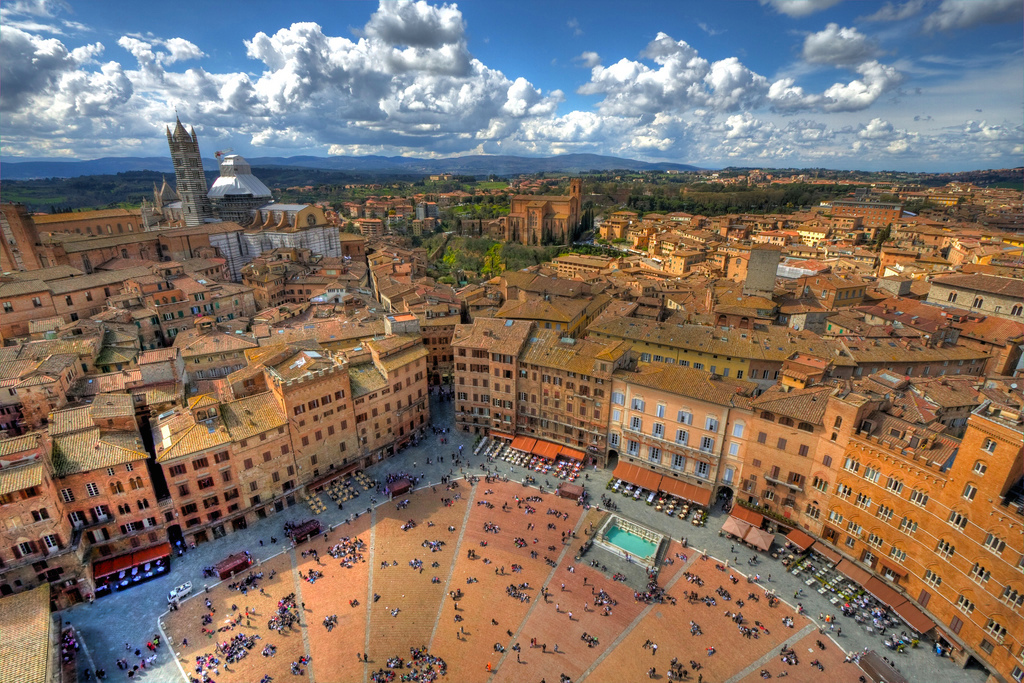 Siena is a city in Tuscany, Italy. It is the capital of the province of Siena. The historic centre of Siena has been declared by UNESCO a World Heritage Site. It is one of the nation's most visited tourist attractions. Siena is famous for its cuisine, art, museums, medieval cityscape and the Palio, a horse race held twice a year. The Siena Cathedral (Duomo), begun in the 12th century, is one of the great examples of Italian Romanesque-Gothic architecture. Its main façade was completed in 1380. It is unusual for a cathedral in that its axis runs north-south. This is because it was originally intended to be the largest cathedral in the world, with a north-south transept and an east-west nave. 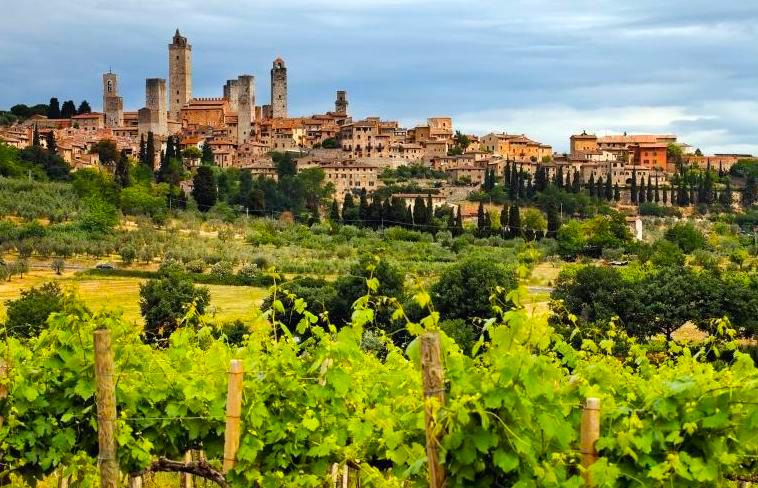 San Gimignano is a small walled medieval hill town in the province of Siena, Tuscany, north-central Italy. Known as the Town of Fine Towers, San Gimignano is famous for its medieval architecture, unique in the preservation of about a dozen of its tower houses, which, with its hilltop setting and encircling walls form "an unforgettable skyline". Within the walls, the well-preserved buildings include notable examples of both Romanesque and Gothic architecture, with outstanding examples of secular buildings as well as churches. The "Historic Centre of San Gimignano", is a UNESCO World Heritage Site. 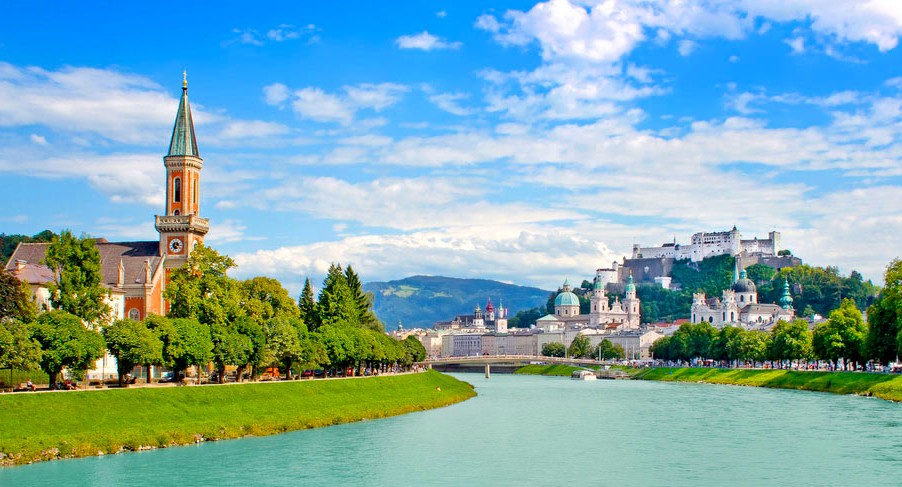 Salzburg is the fourth-largest city in Austria and the capital of the federal state of Salzburg. Salzburg's "Old Town" is internationally renowned for its baroque architecture, great shopping and is one of the best-preserved city centers north of the Alps. It's also the birthplace of Mozart, the prolific and influential composer of the Classical era. If you have seen the movie The Sound of Music, you may think you know all there is to see in Salzburg. Admittedly, it is difficult not to spontaneously burst into song when you're walking along the Salzach River, or climbing up to the Hohensalzburg fortress which looms over the city. But there is a lot more to this compact, courtly city than Julie Andrews. 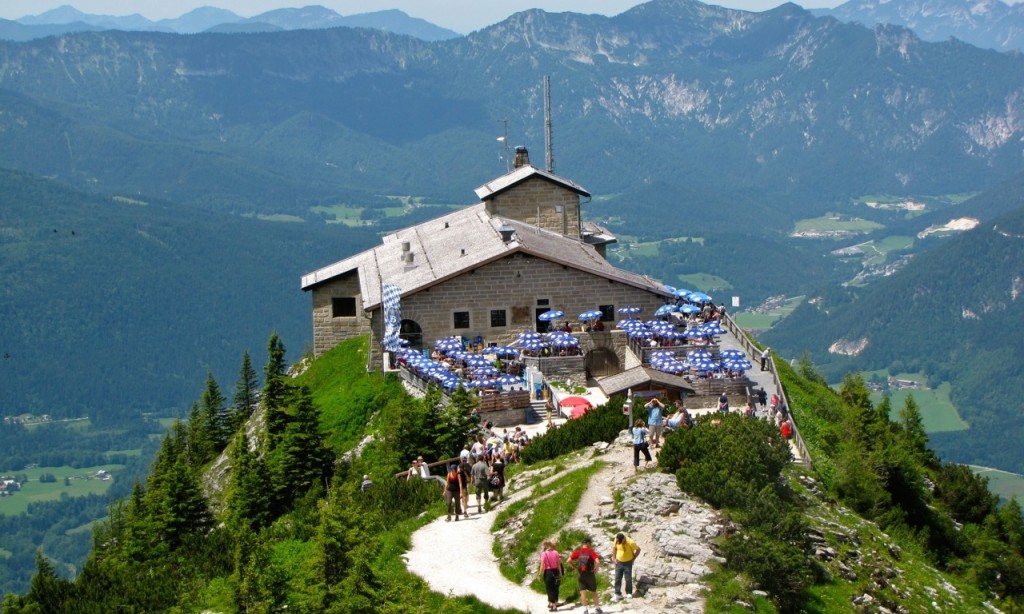 The Kehlsteinhaus (in English-speaking countries also known as the Eagle's Nest) is a chalet-style structure erected on a subpeak of the Hoher Göll known as the Kehlstein. It was built as an extension of the Obersalzberg complex erected by the Nazis in the mountains above Berchtesgaden. The Kehlsteinhaus was intended as a 50th birthday present for Adolf Hitler to serve as a retreat for Hitler and place for him to entertain visiting dignitaries. Today the building is owned by a charitable trust, and serves as a restaurant. The restaurant features an indoor dining area and an outdoor beer garden. It is a popular tourist attraction. Informal tours of the Kehlsteinhaus are offered by a local guide to foreigners. 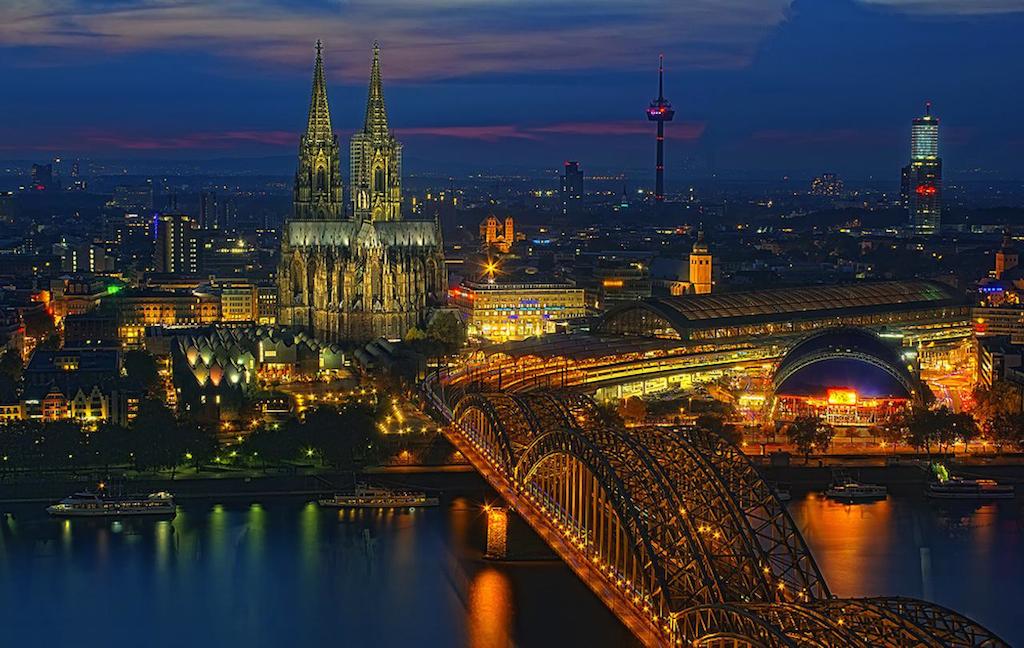 Cologne Cathedral is renowned as a monument of Christianity, of German Catholicism in particular, of Gothic architecture and of the continuing faith and perseverance of the people of the city in which it stands. It is dedicated to Saint Peter and the Blessed Virgin Mary. The cathedral is a World Heritage Site, one of the best-known architectural monuments in Germany, and Cologne's most famous landmark, described by UNESCO as an "exceptional work of human creative genius". It is Germany's most visited landmark, attracting an average of 20,000 people a day. Construction of Cologne Cathedral began in 1248 and took until 1880 to complete. It is 144.5 metres long, 86.5 m wide and its towers are approximately 157 m tall. The cathedral is one of the world's largest churches and the largest Gothic church in Europe. 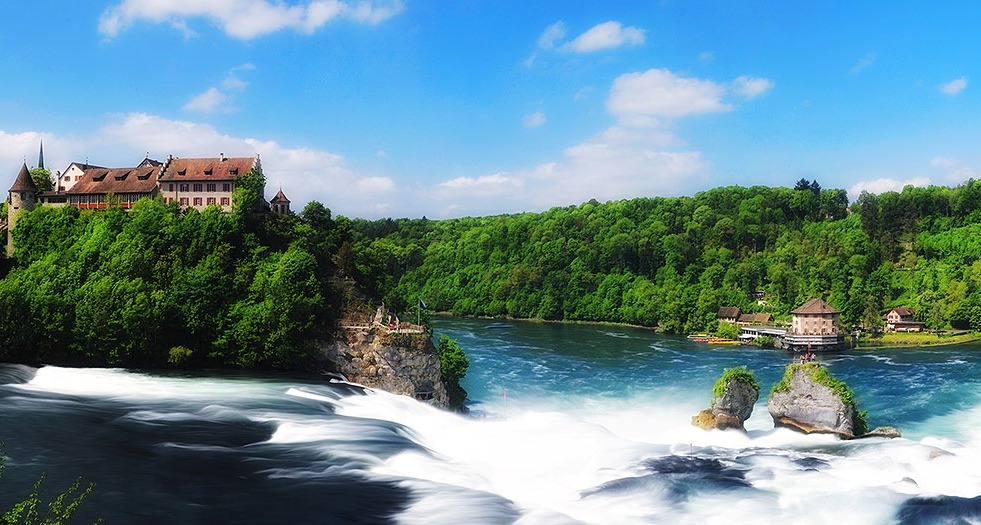 The Rhine Falls (Rheinfall in German) is the largest plain waterfall in Europe. The falls are located on the High Rhine River between the municipalities of Neuhausen am Rheinfall and Laufen-Uhwiesen, near the town of Schaffhausen in northern Switzerland, between the states of Schaffhausen and Zürich. They are 150 m wide and 23 m high. In the winter months, the average water flow is 250 m³/s, while in the summer, the average water flow is 700 m³/s. 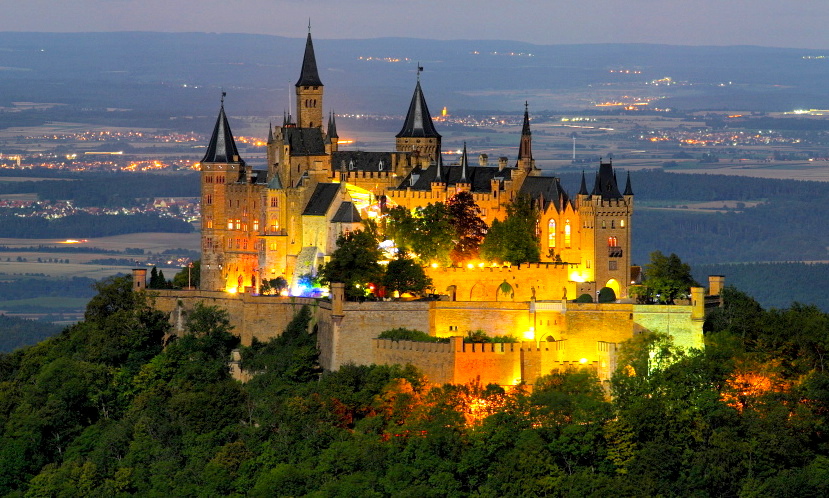 Hohenzollern Castle is a castle approximately 50 kilometers south of Stuttgart, Germany. It is the ancestral seat of the family dynasty, and is situated at the periphery of the Swabian Alb. It is no museum in its traditional sense but a historic as well as a lively place which attracts hundreds of thousands of visitors from all over the world all year round. Besides the essential parts of the art collection, including a significant picture gallery, valuable silver and china as well as the Prussian King’s Crown, numerous concerts, open-air cinema, exhibitions and one of Germany’s most beautiful Christmas markets make the Castle to an attractive cultural event all year round.

Chillon Castle (French: Château de Chillon) is an island castle located on Lake Geneva, south of Veytaux in the canton of Vaud. It is situated at the eastern end of the lake, on the narrow shore between Montreux and Villeneuve, which gives access to the Alpine valley of the Rhône. Chillon Castle is amongst the most visited castles in Switzerland and Europe. 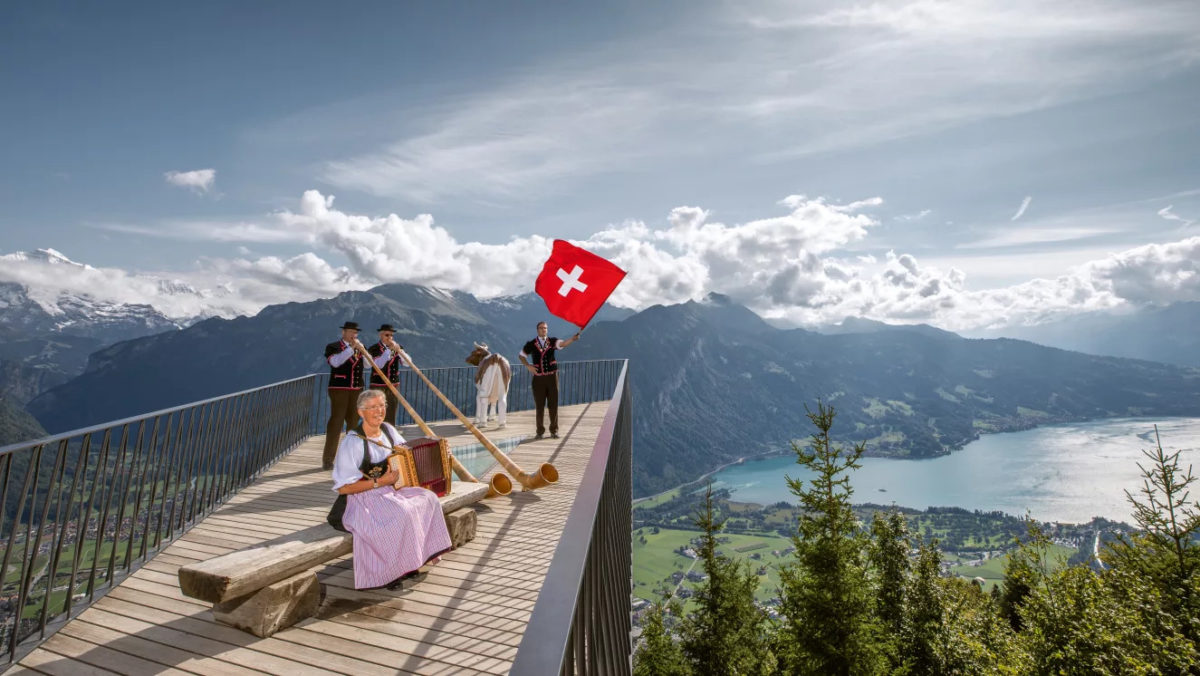 If Interlaken had a king, he would reside on the Harder Kulm. From the viewing platform at 1,322 metres above sea level he would graciously look down upon Lake Brienz and Lake Thun, or admire the Eiger, Mönch, and Jungfrau. In fact, the Harder Kulm Panorama Restaurant is reminiscent of a castle. In order to visit it, however, you don't need to be a king – just take a seat in the cable car and ascend Interlaken's own mountain.