Read about their Autobahn Adventures'
experience

I have been a Porsche fan since I was a teenager and have been fortunate enough to own three 911s. 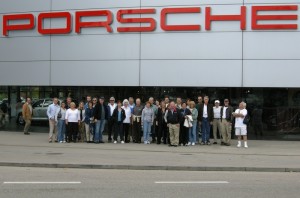 In the back of my mind, I have always wanted to get a chance to go to the factory in Stuttgart and see where these great machines are made. I had even got as far as looking into one of the most common trips to Germany that included a factory tour and was interested to see that you got to drive a Porsche in Germany for a couple of days. This piqued my interest, but the overall cost always seemed prohibitive.

In 2006 at the Porsche Parade, I was talking to a couple I had met by the name of Mark and Tina Trewartha and they told me about a trip they host each year driving Porsche’s through Germany for ten days. The destinations they described sounded really interesting and included a tour of the Porsche factory in Stuttgart. The thought of having a 997 for ten days and getting to tour the factory got me really interested and I was eager to find out more.

I broached the subject with Martha, my significant other, and as she is also a Porsche fan with her own Porsche, she was interested in doing such a trip. In fact, she asked me why I had been dragging my feet in making the decision to go.

We got a lot more information from Mark and Tina and they invited us to come to the last group’s post trip get-together so we would get a better idea of what these trips were like. We decided to go and we got to see lots of pictures and videos of the trip and heard numerous stories about how much fun it had been. Needless to say, that night we signed up to go on the next tour.

The thing that appealed to us most, was that with hotels, breakfasts and evening meals taken care of, and each car having an onboard navigation system, you were free to visit what ever you wanted during each day, be it a castle, a museum, a particular town or the twisty mountain road of your choice. Having the navigation system eliminated any concerns about being lost in a foreign country where we were far from fluent in the language. 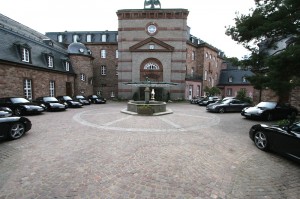 The more we thought about it the more this appealed to us because this meant that although our itinerary was organized such that the group visited a few predetermined sights, for example, the Porsche factory, the RUF production facility, Neuschwanstein Castle (the one Disneyland is modeled on), for the rest of the trip we would go exploring and meet the group for dinner each evening.

With ten months to go, we decided we wanted to plan our trip. We started buying books on things to do and sights to see in Germany. We even plotted our scheduled hotel stays on a map and started researching what sights there are between hotel A & hotel B. Gradually, we got a good understanding of things we wanted to see each day and were able to add a little more meat to our itinerary. It was actually fun deciding, for example whether we wanted to take the cable car to the top of the Zugspitze – the highest mountain in the German Alps or to drive the Deutsche Alpen Strasse, which is the German Alpine road internationally acclaimed as being one of the best driver’s roads in Germany ….. after all, we would be in a 997 Carrera S which is all about the driving experience. 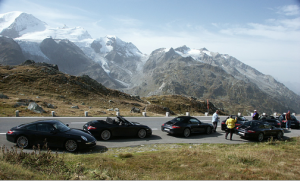 Mark and Tina arranged a group get-together one month before we were due to leave, which gave us a chance to meet some of the group that we would be traveling with – including some who had been the year before and enjoyed it so much that they were going again. It was a great evening, we met some interesting people from different walks of life, all with enthusiasm for the Porsche marque as a common denominator.

At the get together, Mark and Tina gave each couple a personal trip binder with a more detailed itineraryincluding a day-by-day schedule with an approximate time frame for each part of the trip. There were plenty of free days with nothing organized except cocktails and dinner at the hotel that evening which enabled us to work our plans in nicely.

Finally, the date for departure arrived and, is often the case, there was a last minute rush to get everything taken care of before we left. We had our maps and guidebooks and a list of useful phrases in German (which we never needed ) … we were ready!

The trip itself was everything we had hoped for and much more. I decided not to try and summarize all the things we did as a brief article couldn’t possibly do justice to the amount of enjoyment and fun that we had. Instead, I decided to list, in no particular order, ten memorable moments that remind me of some of the truly great experiences we had with Autobahn Adventures.

If driving a new Porsche through some of the most beautiful countryside in Germany and Switzerland, staying in 5-star hotels, eating gourmet food and enjoying fine wines, being able to go wherever you chose on any given day and meeting up for dinner each evening, is your idea of a great vacation, then you owe it to yourself to experience a trip with Autobahn Adventures.