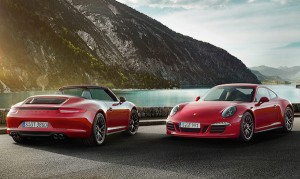 Porsche continues its run of continuous improvement to the iconic 911 with this newest GTS model. With its increased power output and slightly modified suspension, the GTS model is meant to fit in between the Carrera S and the track-oriented GT3.

The Porsche 911 lineup now contains an insane 19 different models, and even the GTS comes in both coupe and convertible bodystyles and is available with either rear- or all-wheel drive. All 911 GTS cars are equipped with a 3.8-liter flat-six engine pumping out 430 hp, 30 hp more than in the standard 911 Carrera S. Either seven-speed manual or seven-speed PDK dual-clutch transmissions are available, and the PDK-equipped car is said to get from 0-60 mph in 3.8 seconds and go on to a top speed of 190 mph.

To go along with its extra straight-line speed, the 2015 Porsche 911 Carrera GTS comes standard with Porsche’s PASM adaptive damper system, which lowers the ride height by 0.4 inch compared to the standard Carrera. The Sport Chrono package and Sport Exhaust are also included with the GTS model for a beefier sound and various extra performance-oriented gauges inside. 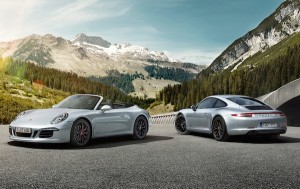 The Porsche 911 Carrera GTS is also set apart from its brethren by special exterior trim pieces like black-gloss 20-inch wheels, tinted headlight surrounds, and black air intake trim up front for a slightly more sinister look. It also has the wide-body shape from Carrera 4 models which gives it a wider track. On the inside, the 2015 Porsche 911 Carrera GTS is trimmed in Alcantara throughout, as is the tradition established by preceding GTS models like the Cayman GTS, Boxster GTS, and the previous-generation 911 Carrera GTS.

Interested customers will pay quite a premium for this slight uptick in performance, as the 2015 Porsche 911 Carrera GTS will cost $15,300 more than the Carrera S. The 911 GTS coupe starts at $115,995, and the convertible costs $127,095, both with destination. Upgrading to the all-wheel-drive Carrera 4 GTS is $6,700 regardless of bodystyle, and of course Porsche’s ridiculous option list will be in full force for this model.

The 2015 Porsche 911 Carrera GTS will be available in U.S. Porsche dealerships by the end of this year.