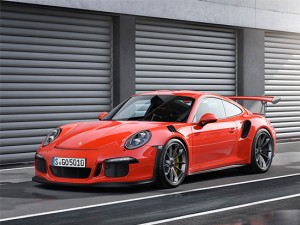 The new Porsche 911 GT3 RS breaks down the barrier between road-going sports cars and race cars. It is equipped with the maximum amount of motorsport technology that is currently possible in a street-legal 911 suitable for everyday driving. Extensive modifications to its drivetrain, aerodynamics, and lightweight design take performance to an even higher level than the 911 GT3. With a Nuerburgring Nordschleife lap time of seven minutes and 20 seconds, the new 911 GT3 RS surpasses the 911 GT3 by five seconds, making it the fastest current generation 911 on the famous German racetrack. Motorsport expertise is the driving force behind this superior performance. The 911 GT3 RS is powered by a four-liter six-cylinder engine developing 500 hp and 338 lb.-ft. of torque, combined with a specially developed PDK transmission. 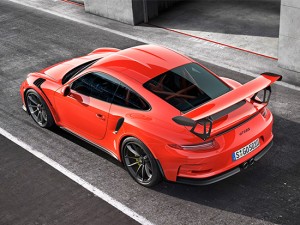 The 911 GT3 RS is a masterpiece of intelligent lightweight design. For the first time, the roof is made of magnesium; carbon fiber is used for the engine and luggage compartment lids, and other components are made of weight saving materials. This makes the RS model around 22 pounds (10 kilograms) lighter than the 911 GT3. Furthermore, the lightweight roof lowers the sports car’s center of gravity which improves its already excellent lateral dynamics. The body comes from the 911 Turbo, and it signifies its status as a race-inspired driving machine with its RS-specific aerodynamic enhancements. The front spoiler lip, which sits close to the ground, and the large rear wing reinforce its dominant look.