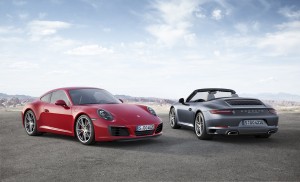 The 911 has been the world’s best-selling sports car for decades. Now the new generation has arrived to further extend this lead. With innovative turbo flat engines, an advanced chassis with an even greater spread between performance and comfort and a new infotainment system it is exceedingly well-equipped for this. Thanks to more than four decades of experience with turbo engines – in both motor racing and production sports cars – the new engines in the new 911 Carrera set benchmarks in terms of performance, driving pleasure and efficiency. New turbocharged engines: 20 hp power increase coupled with lower fuel consumption.

The completely new engine generation with bi-turbo charging raises the emotional driving pleasure in the 911 Carrera to an even more intensive experience: 370 hp (272 kW) of power at the rear of the 911 Carrera is waiting to be unleashed and converted into sporty propulsion. The engine in the 911 Carrera S now delivers 420 hp (309 kW). In both cases this represents a power increase of 20 hp (15 kW). Both engines have a displacement of three litres. The greater power of the 911 Carrera S results from turbochargers with modified compressors, a specific exhaust system and tuned engine management. A standard feature of the new 911 Carrera models is the newly developed Porsche Communication Management System (PCM) including online navigation module and voice control. The PCM can be operated by performing multi-touch gestures on the seven-inch display, similar to operating a smartphone. User inputs by handwriting are possible, for instance. Mobile phones and smartphones can now also be connected via Wi-Fi.